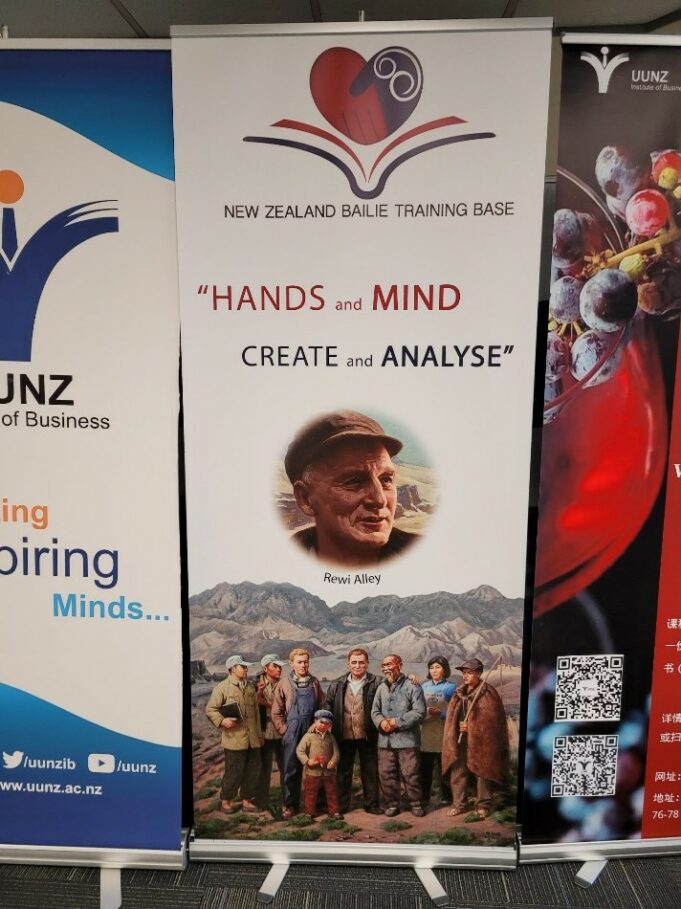 In about 2018, then National President Dave Bromwich was approached by UUNZ with the suggestion they erect a statue of Rewi Alley at the front of their building in Symonds Street, Central Auckland.  In the end this suggestion did not come to fruition.

A delegation from Gung Ho came to New Zealand in late 2019, led by Li Jianping, a fellow Vice President with Dave Bromwich of Gung Ho. At Simon Deng Li’s suggestion, Dave B and Li Jianping went together to meet with UUNZ. From that came the idea of forming a relationship with Bailie schools and Gung Ho in China. Dave B accompanied UUNZ Founder and CEO Dr Jinming (Jimmy) Chen and his wife Director Cathy Zhang to meetings in Beijing with the China government Deputy Minister of Education, along with Michael Crook, chair of Gung Ho, and representatives from the three Bailie Schools. Plans were made to further this relationship in China, but Covid threw a spanner in the works. Known as ‘Hands and Minds together’ The Bailie education philosophy incorporates practical learning with theoretical study. The New Zealand Bailie Training Base (NZBTB) was established to make connection to the three Bailie Schools in China, and to research ways in which a Bailie training approach can be incorporated into vocational training in New Zealand.

Back In New Zealand, Jimmy Chen proceeded with setting up the New Zealand Bailie Training Base. It was then suggested that a Rewi Alley Commemoration Hall be founded, recognising the three legacies of Rewi Alley, i.e. the Bailie Schools, Gung Ho and the New Zealand China Friendship Society.

Dave Bromwich and I went to Auckland on the Thursday before the start of the society’s conference in June, so that we could touch base on a few things.

When we arrived at UUNZ on the Thursday afternoon, Director Cathy Zhang met us at the door. While Dave Bromwich went through to check on the conference room facilities, Cathy showed me around the area she and her husband Dr Jinming Chen had set up as a commemoration of Rewi Alley’s activities in China.

I had heard some details of it in the preceding couple of months, but I have to say I was absolutely staggered at what they have done to commemorate the memory and work of this great man. There were three rooms recording, in words and images, his life from his boyhood in Christchurch right through to the work he is famous for in China.

At the end of the tour, we came to a framed artwork on the wall, which had the word Love in Chinese, English and Māori, superimposed on a stylised pounamu background. Cathy said her daughter Sarah had designed it and she was now looking for someone to do it in needlework.

When I told her I have done cross stitch for over 30 years and would be honoured to do it for her, she hugged me and almost burst into tears! She told me she had been looking for over a year for the right person to do it, because it needed to have significance. My connection with the society and the Rewi Alley story in particular made that perfect. I said to Cathy I wanted no payment as it was my honour to do it, as long as she paid for the materials. When I returned home I had a couple of emails from her, and I could tell she was uneasy about not paying me for my time. It was then my wife Carol suggested she may wish to make a contribution to the He Ming Qing scholarship programme. Kathleen Hall was a New Zealand missionary nurse in China who worked in poor rural areas in the 1930s under extremely difficult conditions and trained local nurses to work alongside her. The people called her He Ming Qing. The He Ming Qing Memorial Scholarship was established in her honour by our society to provide a three to four year scholarship for young Chinese women from poor rural areas, enabling them to complete nursing training in order to return to their villages and work for improved health standards.

I emailed Cathy the background to what the scholarship programme entails, included the last report received from the nursing students being trained at the moment, and suggested she may wish to make a donation to this very worthy programme. The upshot of this has been the NZBTB has introduced the New Zealand Academy of Chinese Painting and Calligraphy to us, and the intention is for them to produce some artworks, which will then go into an exhibition and be auctioned, the proceeds of which will go to the He Ming Qing scholarship programme; what a great and moving story! Hamilton branch president and chair of the He Ming Qing committee, Miao Fan, is currently organizing the event and we will report on it at the time.

So then, I have commenced the needlework, which will be a journey of 12 to 18 months, probably about 700 hours in total. Watch this space in 12 to 18 months from now for the final story of it being unveiled in the Rewi Alley Commemoration Hall! Jimmy Chen and Cathy Zhang are to be congratulated for the setting up of the Rewi Alley Commemoration Hall in tribute and recognition of this amazing Kiwi.